How is the weather in Beijing? It is quite sultry here in Delhi, with a lot of mosquitoes.

I hope you are not troubled by mosquitoes in Beijing? But then, considering the Great Scientific Leaps Forward achieved in China under your glorious and lifelong Supreme Leadership, I am sure Chinese virologists from Wuhan will have developed variants of the bats of Yunnan that will eat any mosquitoes that dare disturb your equanimity.

Comrade Xi, I am so happy that you have called on your Chinese officials to “create a “trustworthy, lovable and respectable image for China…and to improve the way China tells stories to the global audience”.  Indeed, China is getting a lot of abuse and bad media coverage across the world about this terrible coronavirus Covid-19; the abuse continues even after that foul-mouthed Donald Trump of USA was kicked out of US presidential office.

Oh! Comrade Xi, I used to feel so very sad for you and for China whenever I heard ex-US President Trump abuse you last year. I used to tell my friends: “Ah! If only Trump had been Chinese! He could have immediately been sponsored by the Chinese government for a Re-Education Program under Short-Term Plan in some convenient Province—say, Uighur— and without doubt Trump would have emerged a better, quieter, more gentle and tolerant man, for such is the wisdom and benign humaneness that marks all educational and re-educational institutions of learning and unlearning under the leadership of Comrade Xi.”

But apologies for digressing, dear Comrade Xi. My main purpose in writing is to tell you that I fully endorse and whole-heartedly support your call on your officials to present a better image of China and to tell better stories of China to the world.

In this regard I am proud to declare that I am a regular reader of The Global Times, which is aptly described as being a Mighty and Virile Organ of the People’s Republic of China.  Not only do I read Global Times, respected Comrade: I also contribute an occasional Letter to the GT Editor, and it is with delight that I present my latest letter below. You will note that it was published barely a day before your ringing call for improving China’s image. I trust my letter will encourage and inspire Chinese officialdom to take one small step forward in their Long March that lies ahead.

In conclusion, dear Comrade Xi, may I narrate, very briefly, this magnificent old Chinese folk tale that has so much relevance and import for China’s image in the world, and indeed for the future of China and the world:

There once was a fine young nobleman from the kingdom of Chu, who set forth on a journey across the country. Upon a day the nobleman reached the bank of a wide river, whereupon he engaged a boatman to row him across to the far shore.

As they were crossing the river, the nobleman accidentally dropped his sword into the water. Displaying great intelligence and swiftness of thought, the nobleman at once drew his dagger and made a notch-mark on the side of the boat where he’d seen the sword go overboard. As soon as the boat reached the far shore, the nobleman plunged into the shallows and scrabbled around in the muddy waters beneath the notch-mark, looking for his sword…

May I respectfully and sincerely suggest, dear Comrade Xi, that China’s diplomats, other government officials, and in particular the senior officials and cadres of the People’s Liberation Army, draw inspiration and lessons from this folk tale as they obey your call and embark on their quest to locate and restore China’s lost respect and honour?

Strength to the People’s Republic of China! Jai Hind!

Today’s the 6th of November. I began the day with 90 minutes of pre-dawn yoga, followed by a brisk two-kilometre walk. Now, energized by a hearty breakfast and healing kaapi,  I check the Air Quality Index on the Weather Bureau site. It announces that the PM 2.5 particulate emissions are a mere 210 micrograms/cubic metre at 9 a.m.

I wipe my smarting eyes and breathe deeply of the pleasantly chill light-brown air, revelling in the tingling sensation that courses through the entire body and mind as the lungs fill with a perfectly-blended mix of SO2, NO2 and CO, flavoured with delicate hints of ozone and hydrogen cyanide and just a touch of that rare element, oxygen…

Forgive me the laboured sarcasm, O most valued Reader; but I’ve finally understood that it’s futile taking the issue of air pollution, or indeed any issue at all, very seriously  in our beloved India that is Bharat. Three years ago, in 2016, I actually took the issue of air pollution seriously enough to write about it [please click here to read it]. But now I realize that nothing’s changed since then, except for the worse.

Instead of wasting my breath in gasping rants

At Kejriwal and Goel, and their many sycophants

I abandon the idiocy of all netas and affiliated fools

For the serenity of hills and rills, still quiet pools…

Let Delhi and its denizens make Haze while the Sun shines!

In this illuminated and detoxified spirit, I recollect and relive four wonderful days I spent in the quiet little town of Barog, near Shimla, in late September 2017. I stayed with my dear friends Micky and Abha: their warmth, their generosity and hospitality helped me shed decades of accumulated stresses and blues, and rediscover the joy and wisdom of simply BEING.

I’ve written earlier about walking up to the old army cantonment of Dagshai during this visit. [You can read it here]. Here are some more photos from that time.  A mere four days’ R&R; yet for me they evoke memories to draw on for a lifetime…

On the way up: Himalayan Queen

In and around home 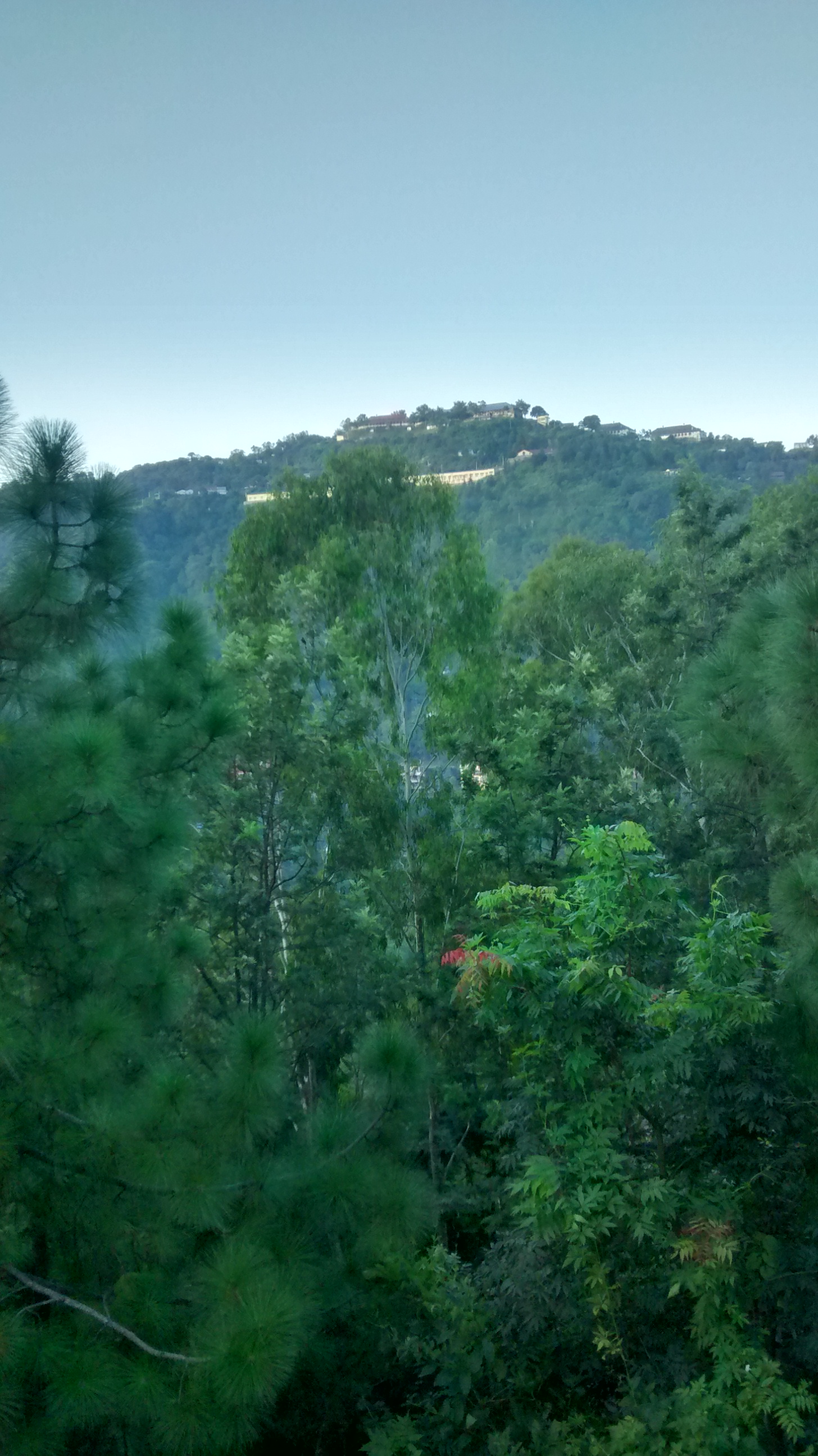 A dreamy day in Kasauli

There’s no road to/from Barog railway station. There’s only a steep, 400-metre path leading down through the forest from the Old Shimla Road.  So Micky dropped me off at a signpost showing where the path begins, and I followed the path down…and down…. 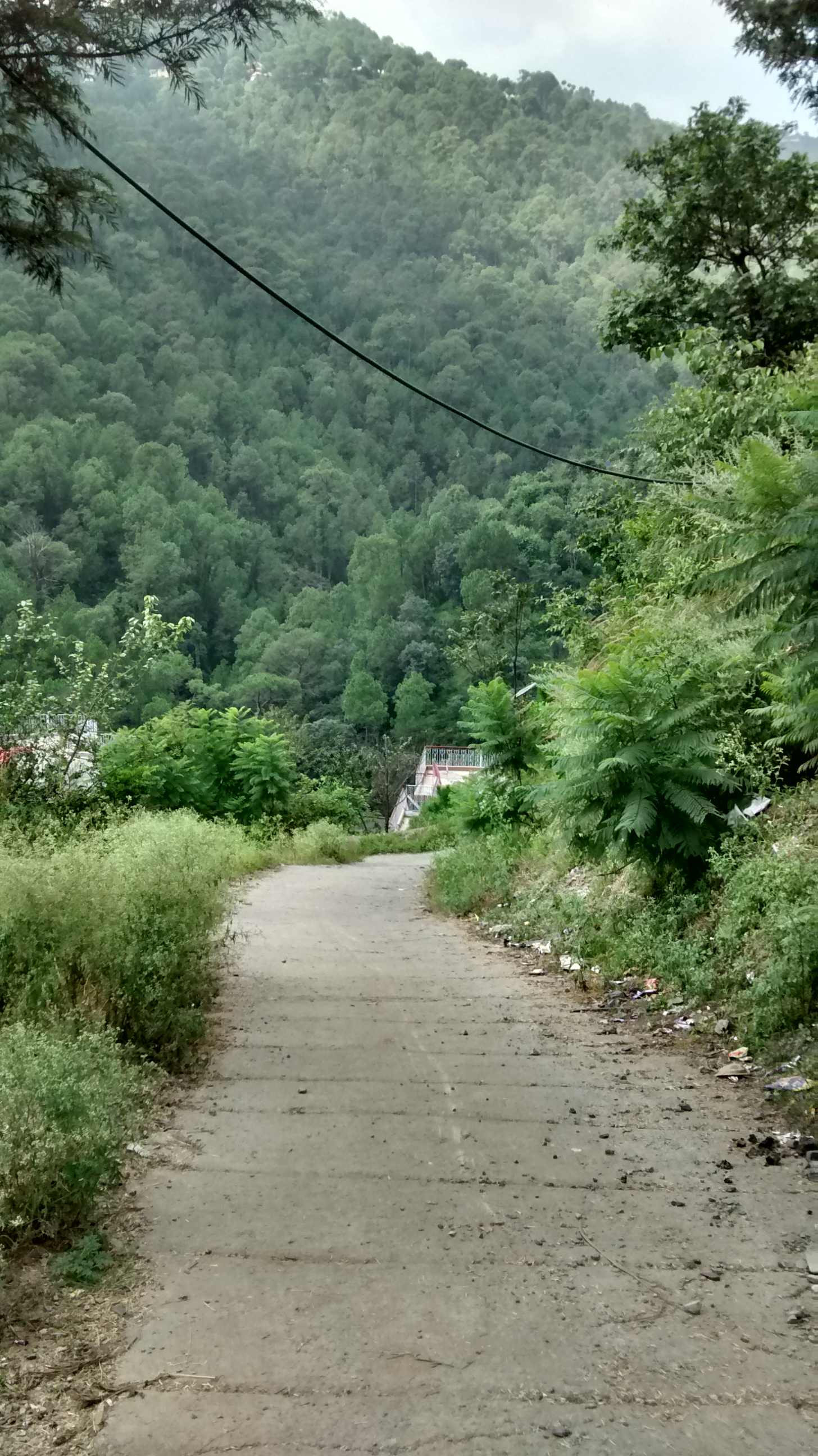 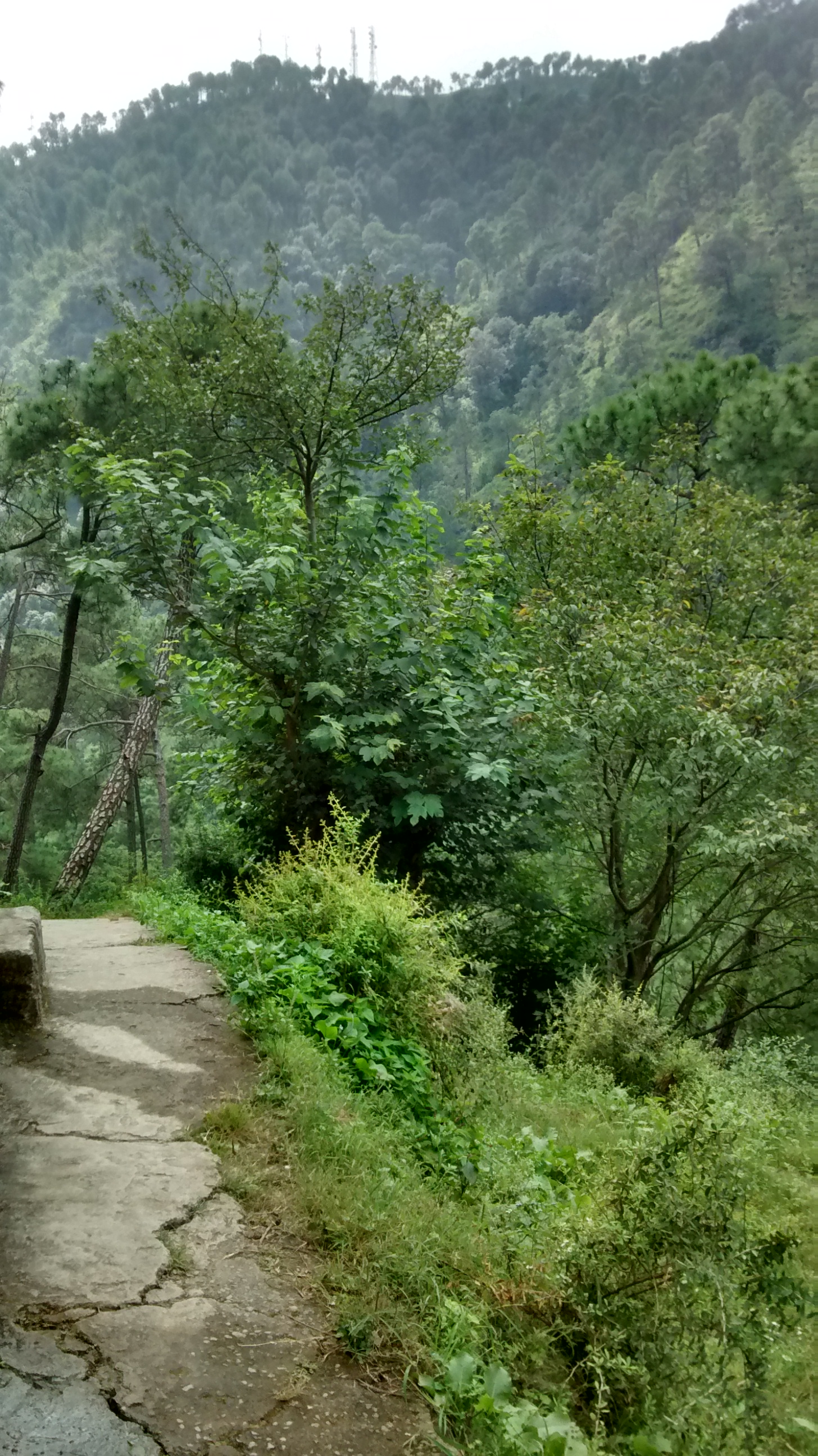 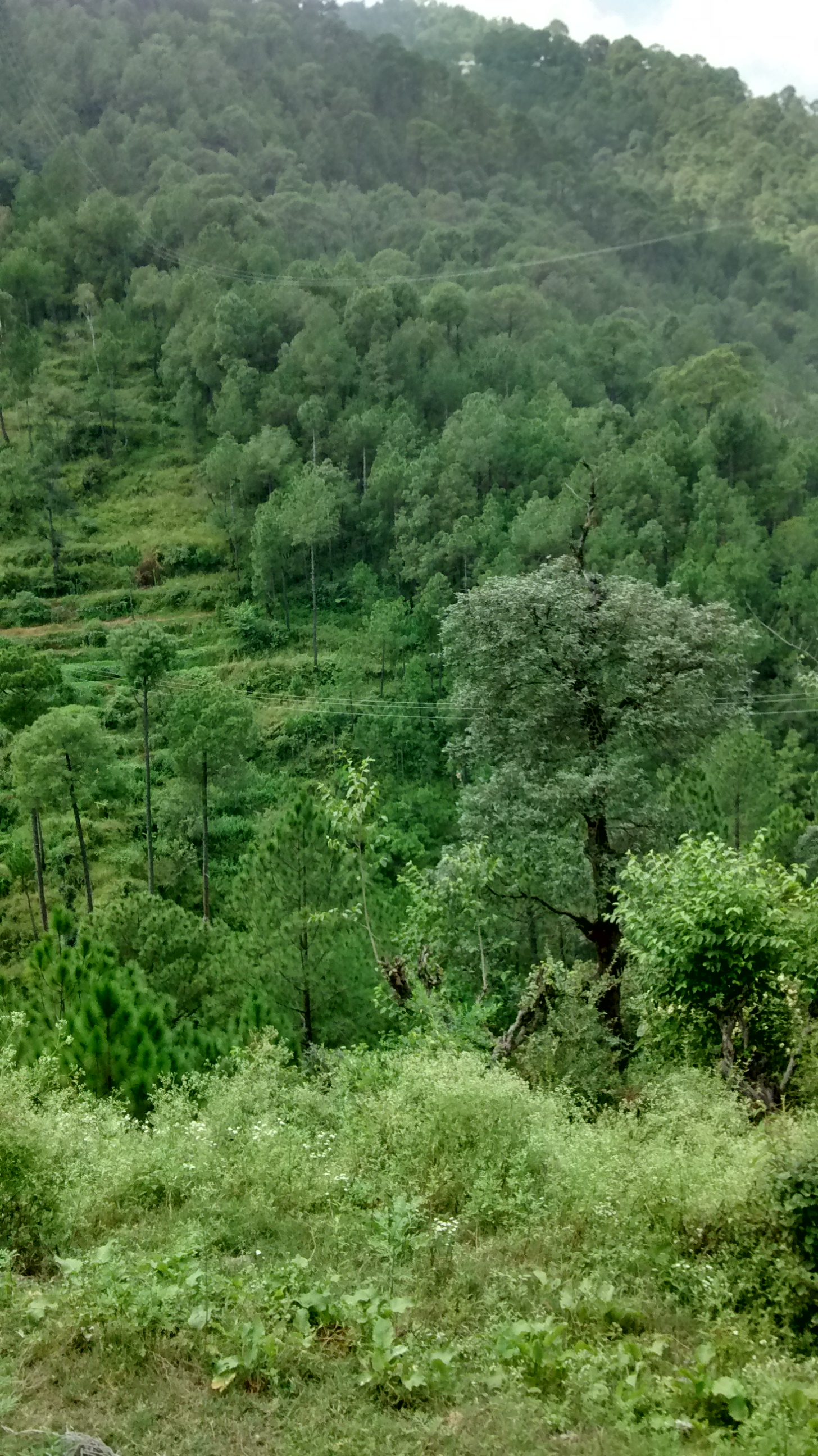 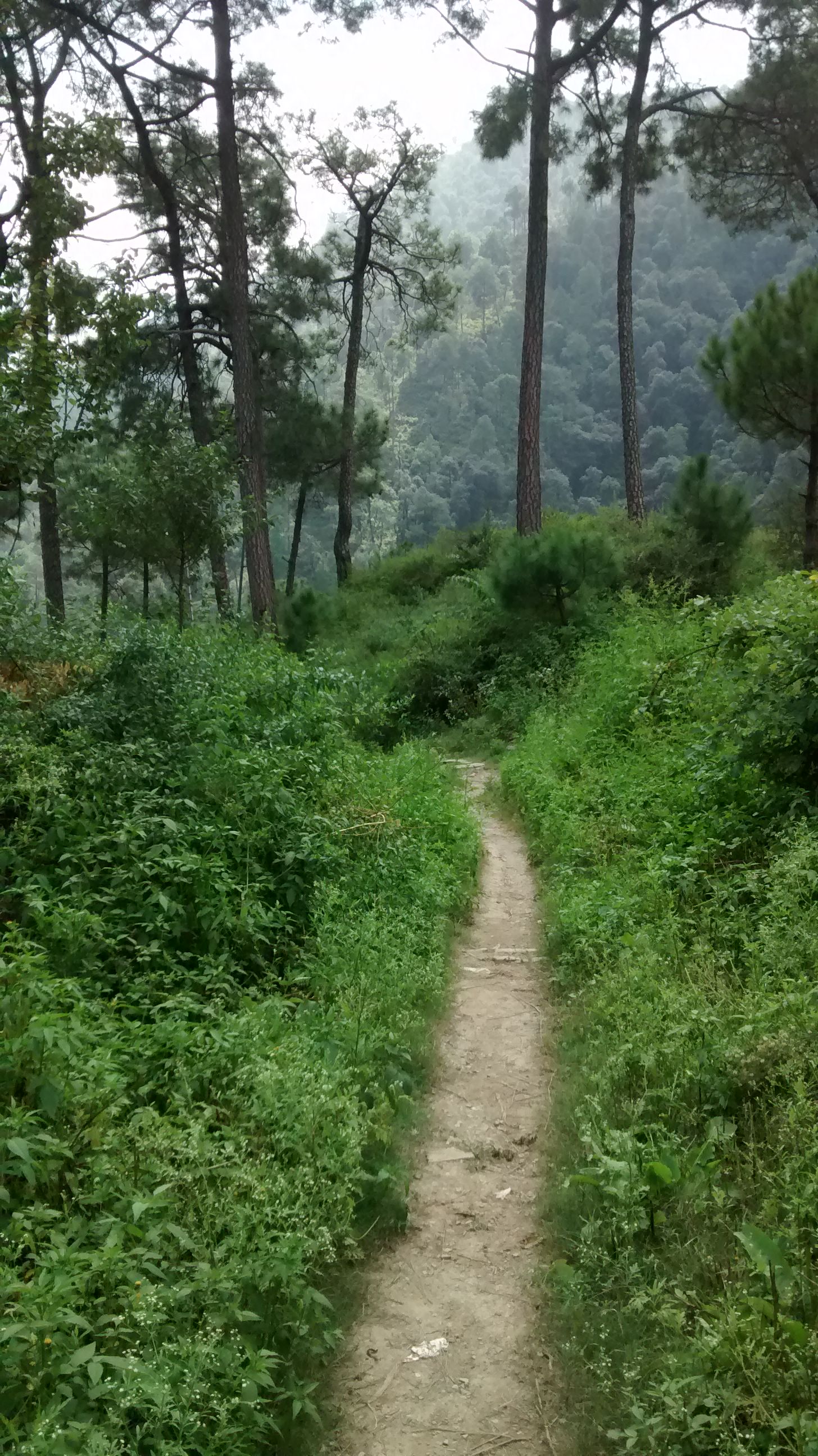 I never imagined I’d enjoy waiting for a train so much.  I spent just over an hour at the station, during which I met only four souls: the cheerful Asst Station Master, an ancient and sleepy gangman; the young man who presided over the station’s canteen and fixed me two cups of black tea;  and a phlegmatic dog who decided I needed constant supervision.  Nothing seems to have changed here since the 1.15 km-long Barog Tunnel was completed in the early 1900s…